Vilis Systems offers the best deals on used and refurbished EMC CX3-20 storage equipment. Either click on the Price Quote or Support Quote buttons above or call us at 952-314-5905 to get assistance from one of our solution architects today. If you’re looking to sell your EMC CX3-20, we have a great asset recovery program to help you get the most out of your idle IT storage equipment. We offer EMC CX3-20 Support & Maintenance for hardware you already own and newly purchased equipment from Vilis Systems for up to 5 years. Our EMC experts are also able to help you with the installation of any EMC CLARiiON solution. 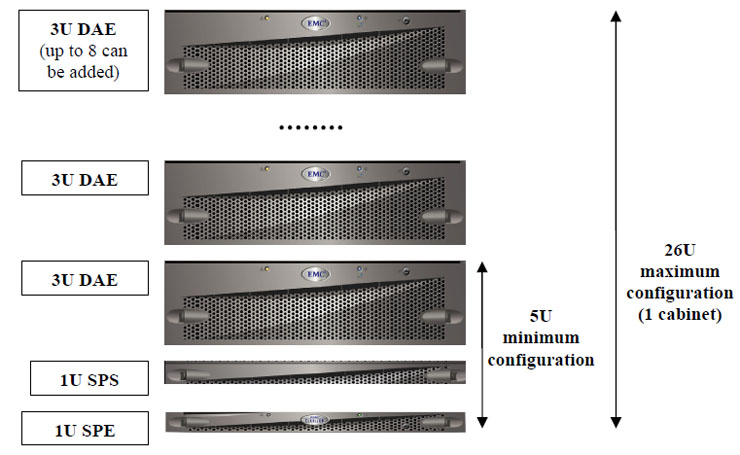 The dual SPS, SPE, and DAE assemblies are rackmounted for efficiency, and provide the user with many different configuration options. The CLARiiON 40U cabinet (with industry-standard 19-inch racks) can house different configurations of the CX3-20 / CX3-20c systems, as well as 1, 2, or 4Gbps Fibre Channel switches (1U and/or 2U) and/or Ethernet network switches. The standard 40U cabinet comes with four power distribution units (PDUs) and four power distribution panels (PDPs). Power supplies on the left side of the cabinet use the left PDU; power supplies on the right use the right PDU. Additionally, all CLARiiON storage systems can be installed in non-EMC industry- standard cabinets.

Figure 2 shows the air dam for the CX3-20 storage processor. LEDs provide indications of LAN connectivity, SP power, boot prorgess, and fault status, as well as power supply and blower status. The LEDs also indicate the speed at which the front and back-end ports are running – green indicates 2Gbps and blue indicates 4Gbps.

Each CX3-20 SP has six 4Gbps Fibre Channel front-end (FE) ports. These ports which are small-form-factor pluggable (SFP) optical transceivers, are customer replaceable and have a default setting of auto-negotiate. Using Navisphere Manager or CLI, the user can change the settings from auto-negotiate to 1, 2, or 4Gbps. These Fibre Channel front-end ports may be connected to a 1, 2, or 4Gbps HBA on a server/host.

Each CX3-20c SP also has one 4Gbps Fibre Channel back-end port, which, along with the peer SP, form two redundant FC back-end loops for disk connectivity and capacity expansion.

The CX3-20 / CX3-20c SP also has two 10/100 LAN ports, one for Management and one for Service, as well as two micro-DB9 communication ports, one for serial communication and one for SPS sensing. The Management port is used to access and manage the storage processor via Navisphere, while the Serivce port is a dedicated port to be used by EMC Certifed Proven Professionals, should the need arise for them to access the storage processor when they are onsite.

As shown in Figure 5, the CX3-20 / CX3-20c SPE uses two 1-kilowatt SPSs to maintain power to the storage system during a power loss to allow for a full dump of the write cache to a reserved area on persistent disk. In the CX3- 20 / CX3-20c, both SPS power output connectors are used to power the SPE as well as the first DAE on the first back-end loop.